Hanoi- and the kindness of strangers 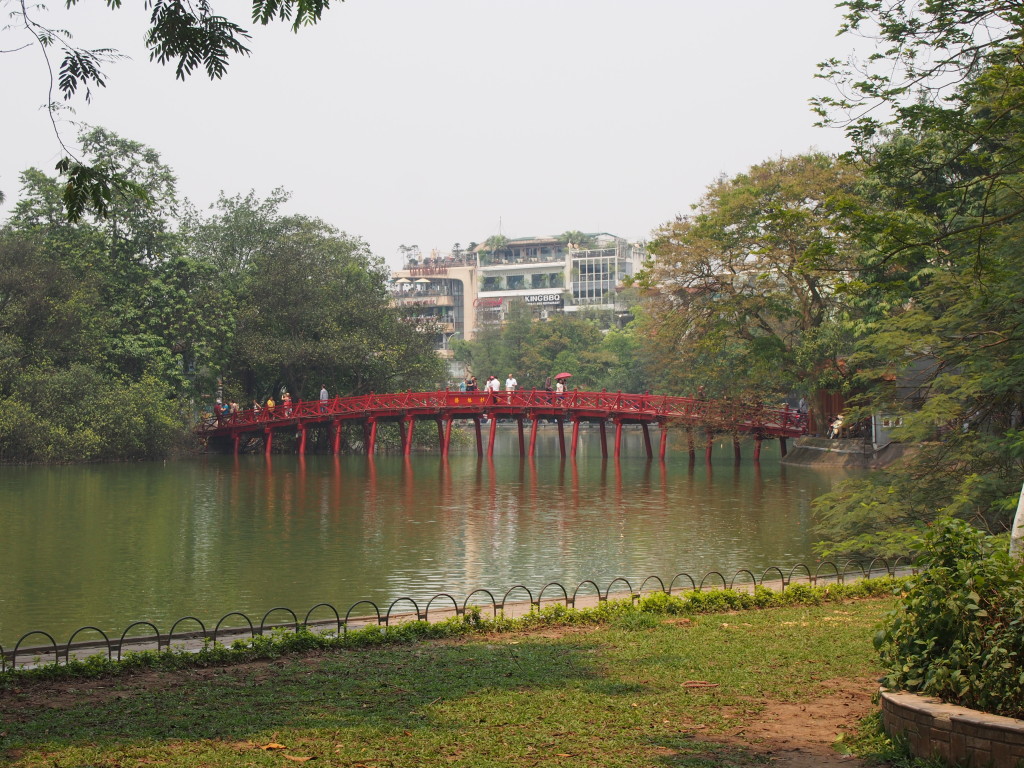 After our short time in Ho Chi Minh City we flew to Hanoi. Hanoi is cooler than Saigon but about a thousand times more humid. It is an incredibly green city with lots of parks and tree lined streets. 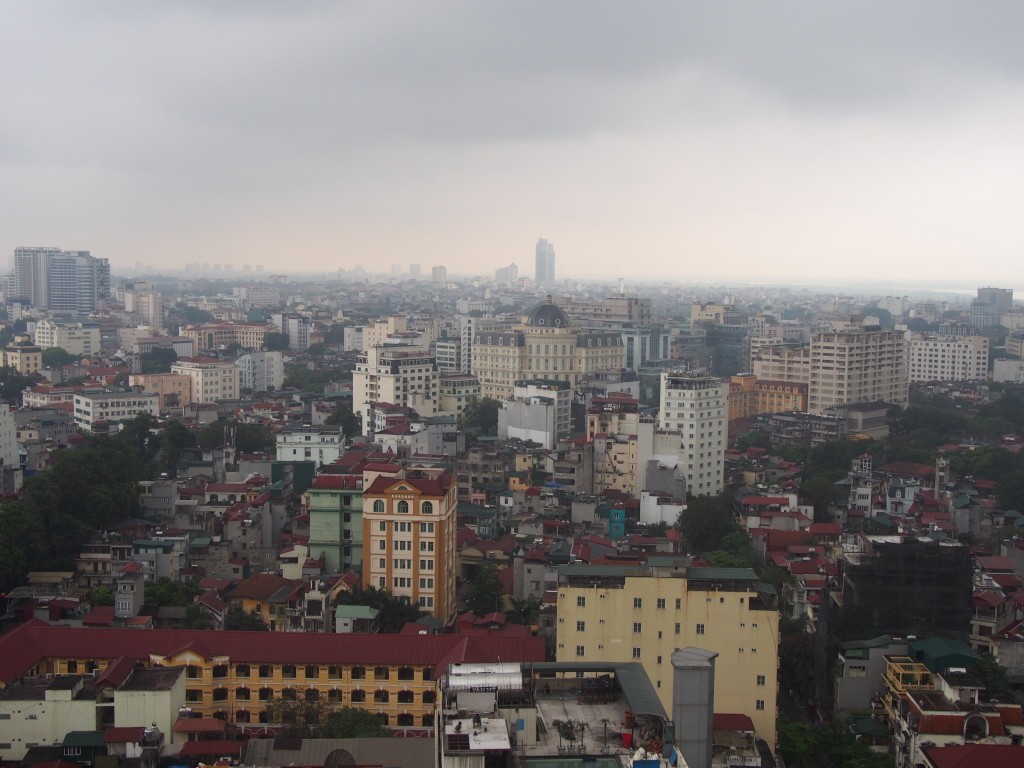 There is a very strong French influence in the architecture (for example, the opera house). 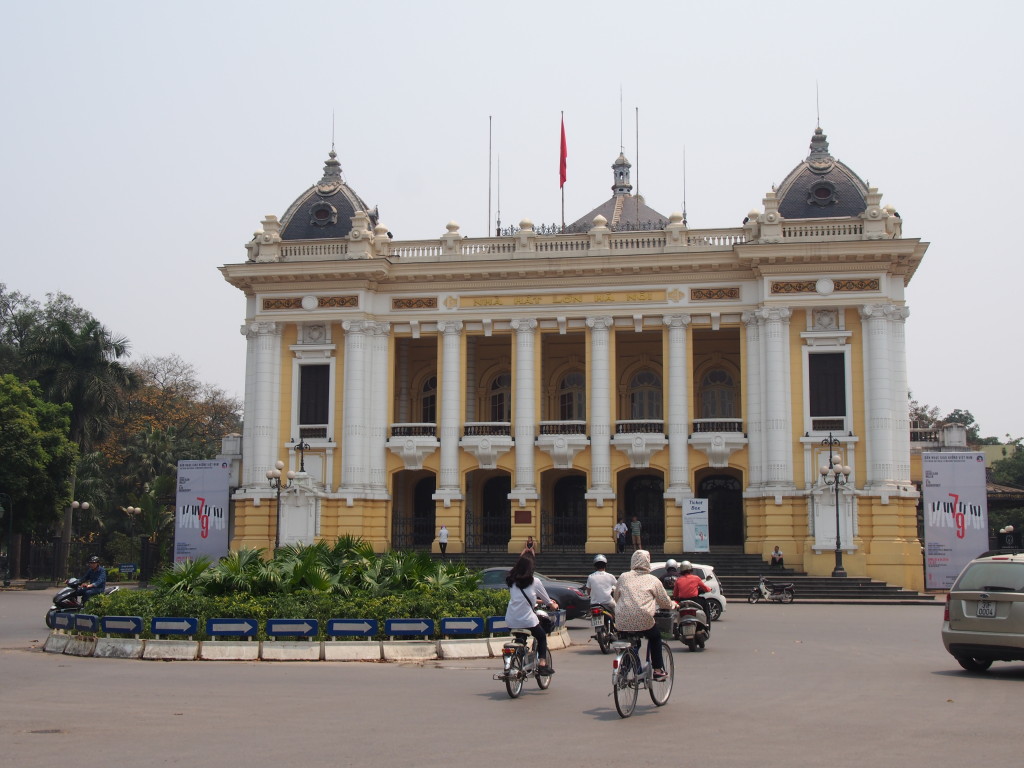 Near the old quarter, where we spent most of our time, was a huge lake- Hoan Kiem or “lake of the returned sword”. 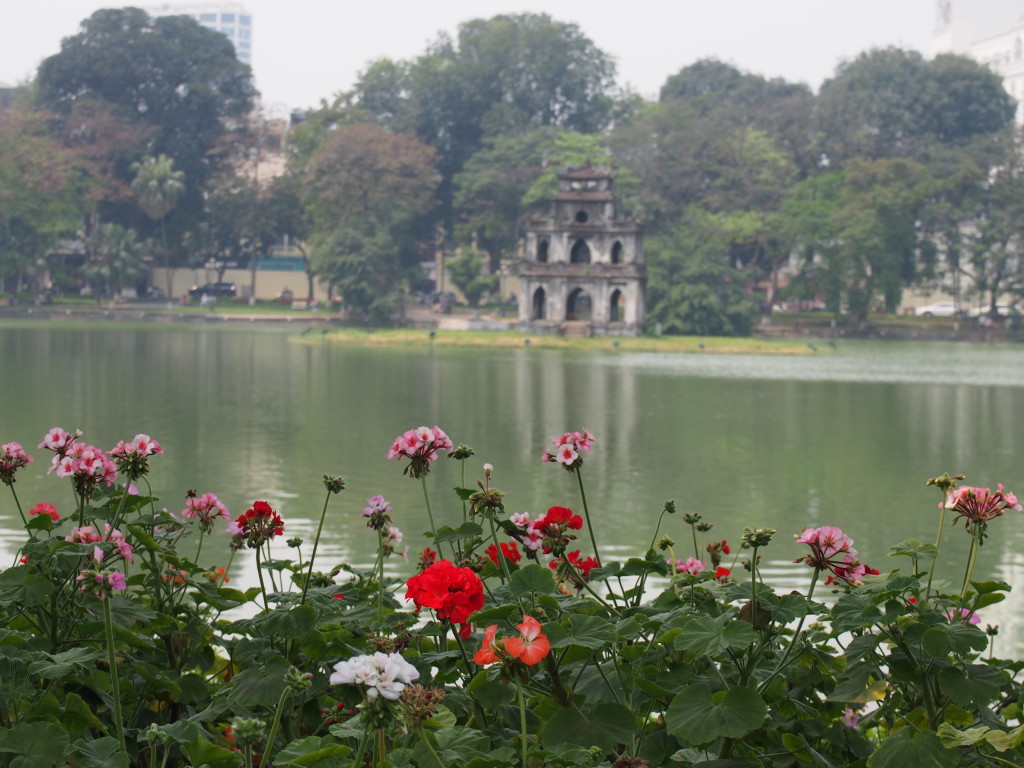 Lake of the returned sword 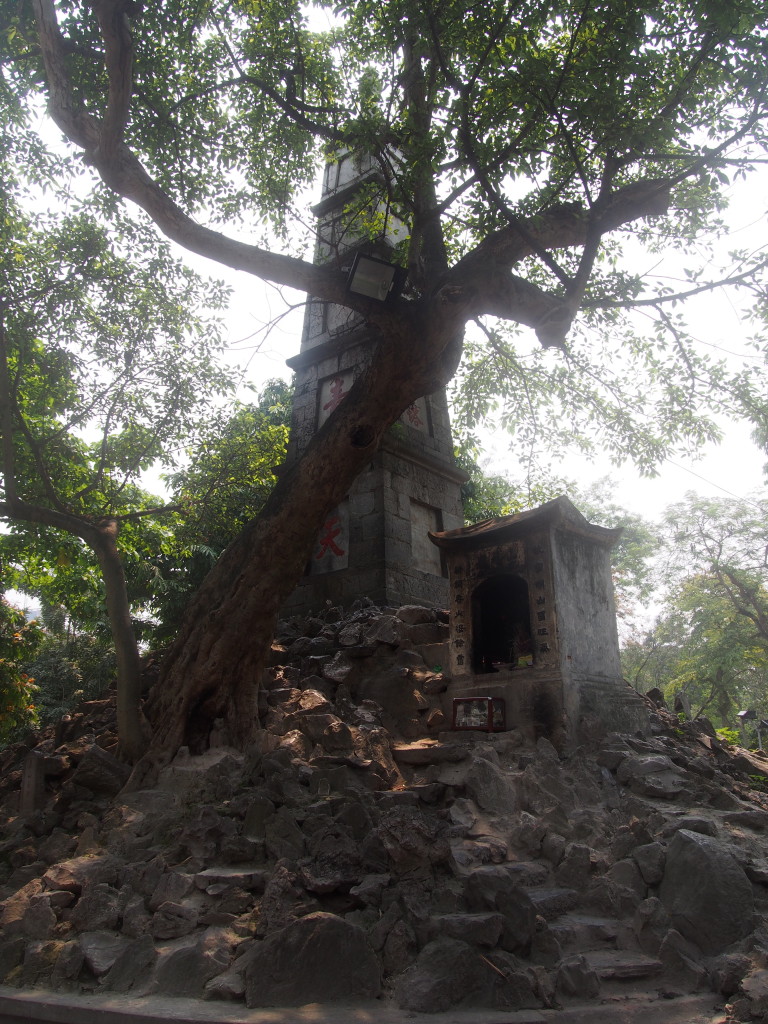 Near Lake of the Returned Sword

We spent the first few days wandering around enjoying the vibrant city. One thing that we have really enjoyed about Vietnam is the interaction between locals and foreigners. In Cambodia we very much felt that there was an area for tourists and an area for locals and the two never really met. 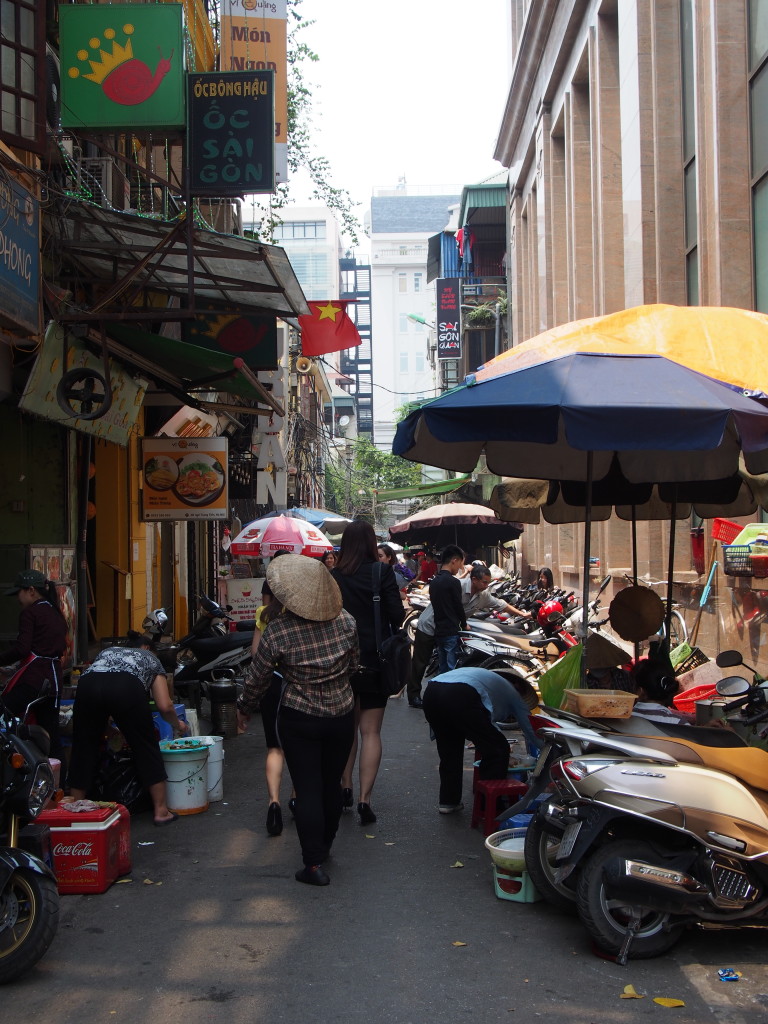 We have found that not to be the case here. There is a street in the old quarter that comes alive with tourists, locals and vendors every night. In the evenings, small tables and chairs are set up all along the street (and I do mean small- my knees are almost up to my ears when I sit in them. Poor Nick looks like Buddy the Elf sitting in his desk at school) and all facing towards the street. There are kegs of fresh beer (the worlds cheapest at $0.23 a cup) set up and plenty of peanuts, rice cakes and other snacks to go along with it. Some places serve food, but it seems like the majority of the food orders get called in and delivered from somewhere else. We ordered food from the guy manning the keg at our section of the street and a few minutes later a lady walks up from down the street with our dinner. We opted to stay away from the fried dog on the menu and opted for dumplings instead. Although, they were simply “meat” dumplings so we may have gotten dog anyway. 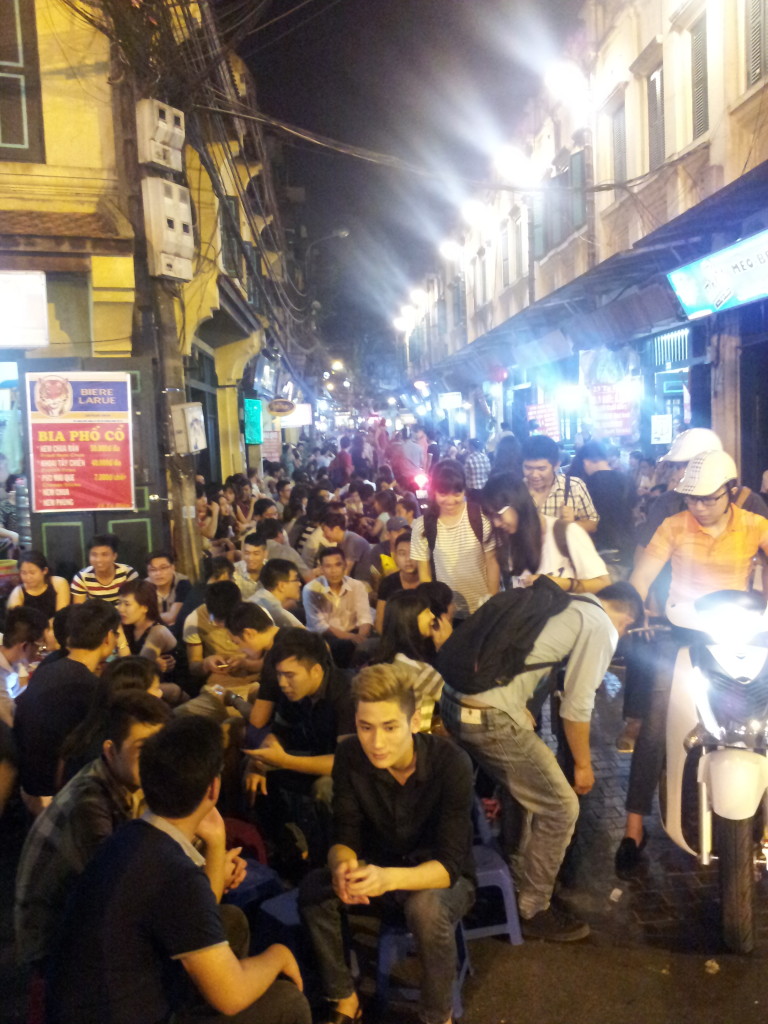 The whole area absolutely comes alive and the street gets incredibly crowded with tourists and locals alike out enjoying the evening. And of course, street vendors. My favorite ones are the ones selling food. We see people carrying baskets of food and grills. When someone orders, they just plop down on the sidewalk or street (where ever there is space) and light their tiny grills and cook whatever has been ordered. It is so fascinating! 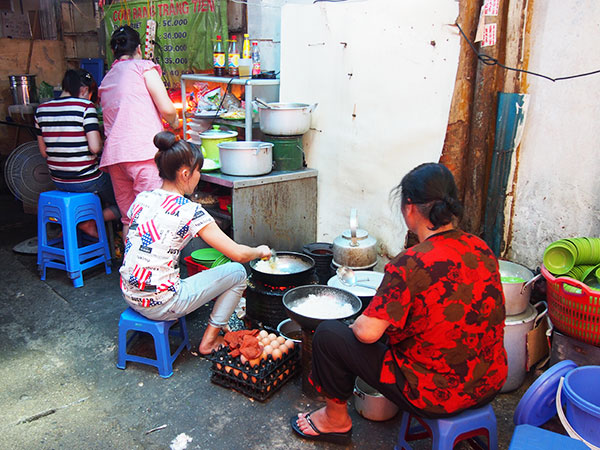 We have met some very kind, absolutely amazing people on this trip, definitely more good than rotten. Hanoi seems to be no exception, in fact, we may have met the kindest person yet here in Hanoi. One day we went for a walk along the river, it was a beautiful walk and a very nice day so we wandered for a long time. We realized we were fairly close to the opera house so we headed in that direction and marveled at that for a while. We turned around to go get lunch and head back to our guesthouse to cool off when the unthinkable happened- my flip flop broke! The flip flops that I have walked many miles in and worn everyday since I purchased them for all of three dollars on in Thailand only lasted 2 months, unbelievable! The really horrible thing is that we had walked past a street dedicated solely to shoe sales- flip flops, athletic shoes, dress shoes, everything. I had looked down, saw my flip flops were going to go soon and decided, meh, I will buy some later. So here we are, a long ways from our guesthouse (and the street of shoes) and I am down to one shoe. I tried to hobble along in it, but then I had to give up and go barefoot on the streets, carrying what was left of my shoes. 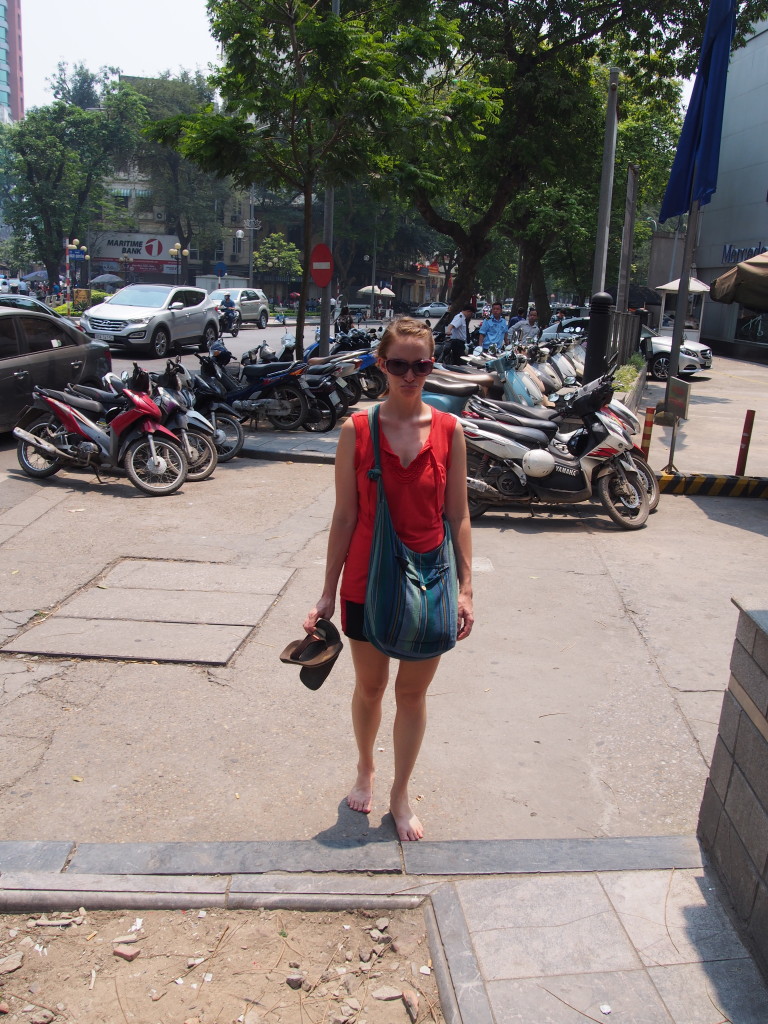 We were walking back towards the shoe street when a voice behind us said “excuse me, do you speak English?” we turned around and said yes to the lady pushing a baby carriage who had approached us. She then continued “I saw that you were having some trouble with your shoes. My car is just down the street. If you want, you can have my shoes.”

A complete stranger offered to give me her shoes!

I thanked her profusely, but instead of taking her flip flops, I had her point us in the direction of a shoe store (which seem to be everywhere until you need one!). It was so shocking, so nice and just completely out of the blue!!

We found a shoes store and despite the fact that I had zero bargaining power (clearly, I needed the shoes) I still managed to do my best bargaining to date- I knocked the sales lady down from 150,000 dong to 100,000 dong. I am sure someone else could have done better, but considering that I had my broken shoes in my hand and was barefoot, I thought it wasn’t half bad!