Our Vacation from Vacation, in Bali

Unfortunately, all good things must come to an end. Fortunately, sometimes the end means going to Bali. If you have to leave the Marina Bay Sands, it should always be to go to Bali. 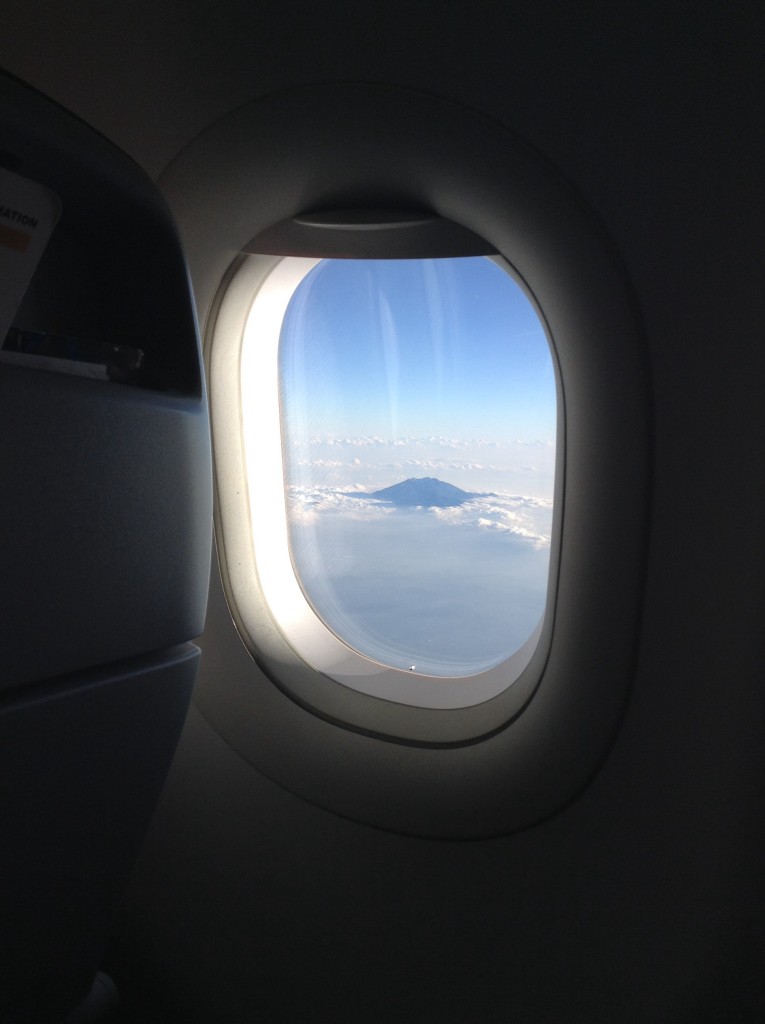 Our flight was supposed to be about two hours and twenty minutes, but ended up being about three hours because the runway was closed for inspection (when this announcement happened, we all just looked at each other like, what!?! Did they forget we were coming?). However, our pilot assured us we had plenty of fuel so we circled for about half an hour. Apparently, the inspection went well because we landed shortly afterwards.

The night before we left we had emailed the guy whose house we had rented to find out about a ride. He told us for a mere $42 we could get a ride from the airport. We were all under the impression that it would be about a forty minute drive for the airport, so this felt a little steep, but we decided to go for it since we were not sure what else to do. It was very nice to have someone holding a sign that said Mr./Mrs. Nick as we left the airport. We got all situated in the van and asked how long of a ride we had to our little village of Amed- expecting an answer of about forty minutes, so we were all shocked when our driver, Ketut, answered three hours. We had been looking forward to getting to our new digs and when he told us three hours the collective energy of the car just plummeted. He did ask if we wanted to stop somewhere for dinner, which we gratefully accepted.

Traffic in Singapore had been orderly and so we were surprised when, once again, mopeds and chaos ruled the road. Kelli, Nick and I rode in the back of the van, but Ken rode up front where he had a front row view to the madness. He declared at one point that there was no way he would ride on a moped in Bali, not with the traffic as crazy as it was! There were several close calls, but everyone here seems to know the exact dimensions of their car or moped and exactly the size of space that it needs to weave in and out of traffic.

We drove about an hour and a half before stopping for dinner at a small restaurant on the side of the road. Although it was one of the pricier places we have eaten, it was a steal compared to Singapore with dinners costing less than $6 each. The food was also fantastic, there was plenty of spice (I personally found the food in Singapore a little bland- although I didn’t try the famous chili crab which I imagine has a bit of a kick). After a delicious dinner we started the second half of our journey.

The rest of the drive was much quieter, as we got out of the main cities and into the more rural areas. The only lights were from other cars, the stars and the almost full moon. Although it was very dark we could tell that there were plenty of mountains and we were eagerly awaiting the views in the morning. We finally arrived in the village (not the town, not the small city, but the village. Our driver, Ketut, was very specific and would correct us if we referred to it as anything else) of Amed where we found our villa (right behind the convenience store- how fortuitous!). We checked out the amazing villa and sat up on the rooftop cabana for a long time just chatting and admiring the outline of the mountains that stretched up on three sides of us.

The next morning we were all up early. The staff at the cabana were up early pulling pool chairs from under our cabana and turning on the jets of our rooftop plunge pool (yes, we have a roof top pool here. It is so sweet!!). 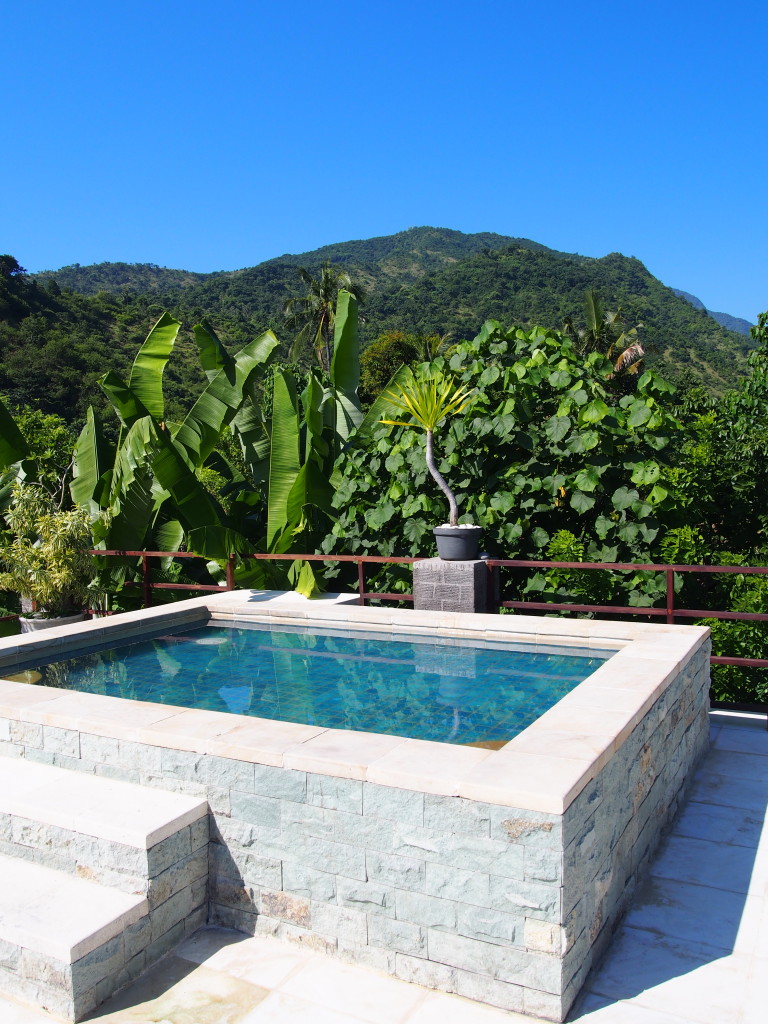 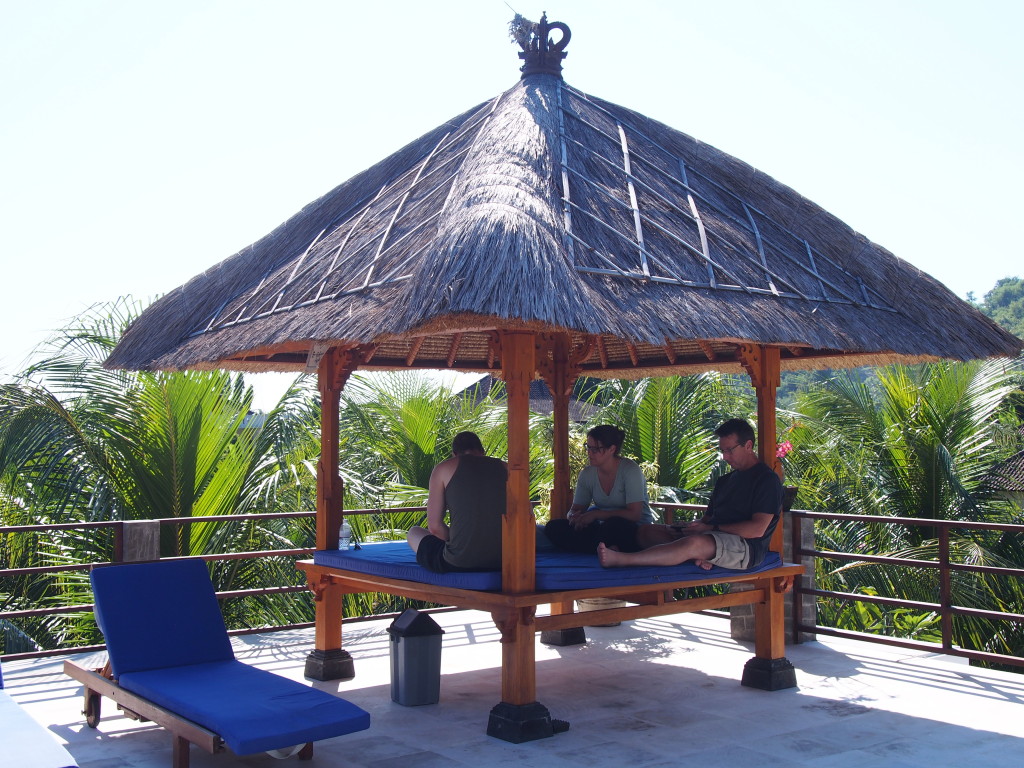 Hanging out on the cabana

We all heard the noise and thought that it meant other people were up so we all rushed to get dressed and met on the roof. The views were just as spectacular as we had anticipated. After enjoying the views we set off in search of breakfast which we found at a beachside resort right across the street. We ate with a view of the ocean and a gorgeous pool and then went down to investigate the water. It was unbelievably warm. While it is humid here, it is not as humid as Singapore or Malaysia and the weather is quite mild, in the 80’s with wonderful sea breezes. It is incredibly pleasant- although the sun is quite intense if you stand full in it!

After breakfast we met the owner/manager of the villa who gave us the wifi password, informed us that any time we wanted a fresh coconut all we had to do was ask one of the staff and they would grab one for us (so, naturally Nick and I have had one every afternoon) and told us about some of the best beaches around. Unfortunately, none of them were within walking distance. Fortunately, the villa also rented mopeds! So one day after declaring he would never drive a moped in Bali, Ken found himself on a moped. 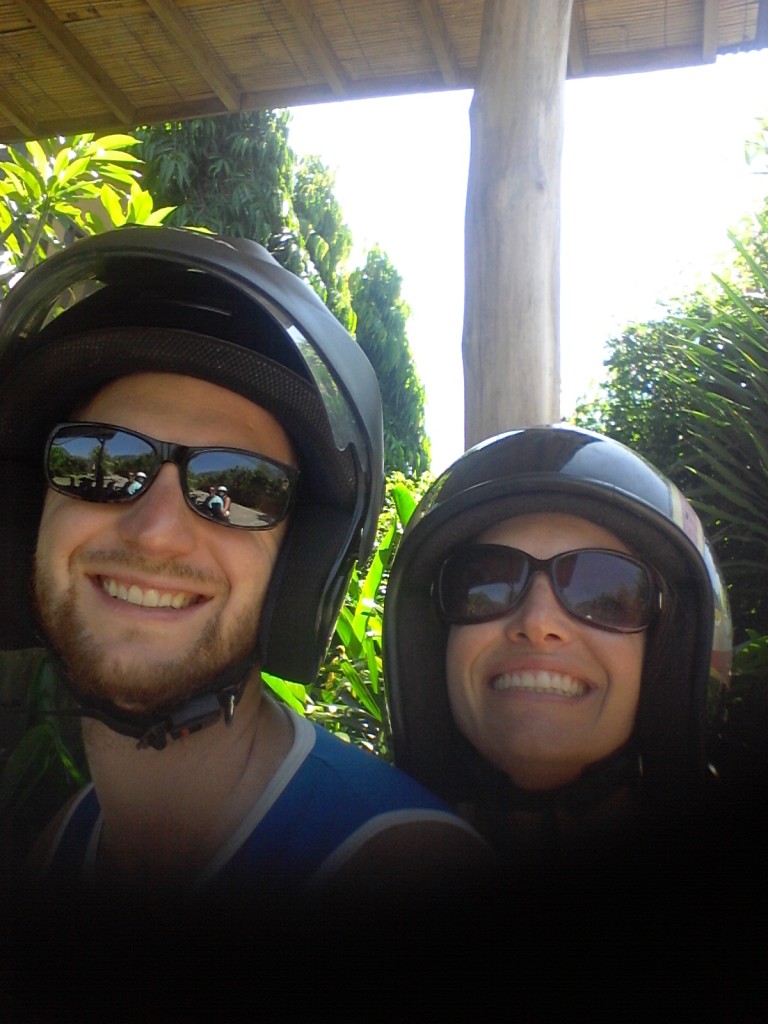 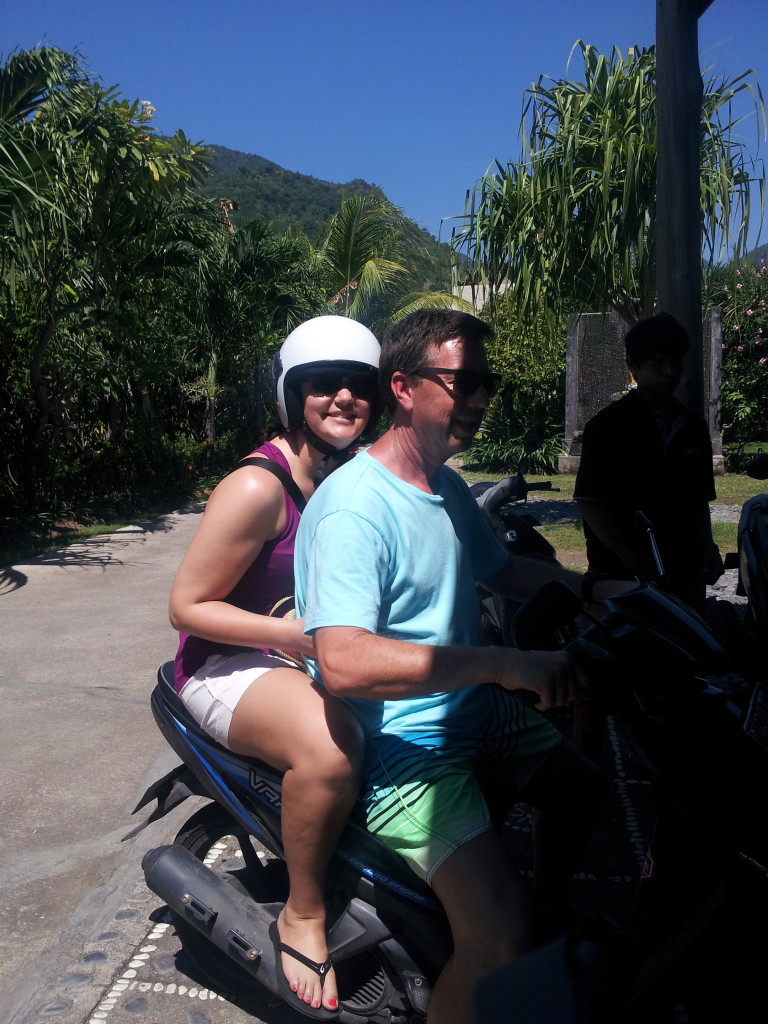 We rented two and set off to find the beaches. Of course, a big, gorgeous, black sand beach would have a sign or at least be obvious and easy to find, yah? Nope. We drove past it once and barely found it the second time. Instead of a street, we had to drive along a narrow ledge next to a dirty canal. It was by far the hairiest part of our drive. But the beach was exquisite- the sand was soft, the water was crystal clear and warm and it was a nice quiet beach. We spent most of the afternoon floating around and swimming. When we got hungry we found a small family run restaurant and racked up another huge tab of about $14 for all four of us. Our day of travel had worn us out, so we mostly lounged around, drinking coconuts, hanging out at the pool or up on our rooftop deck. We tried the restaurant across the street from us for dinner, but found it to be lackluster and overpriced. So, we went back to our villa, made piña coladas and played Uno! 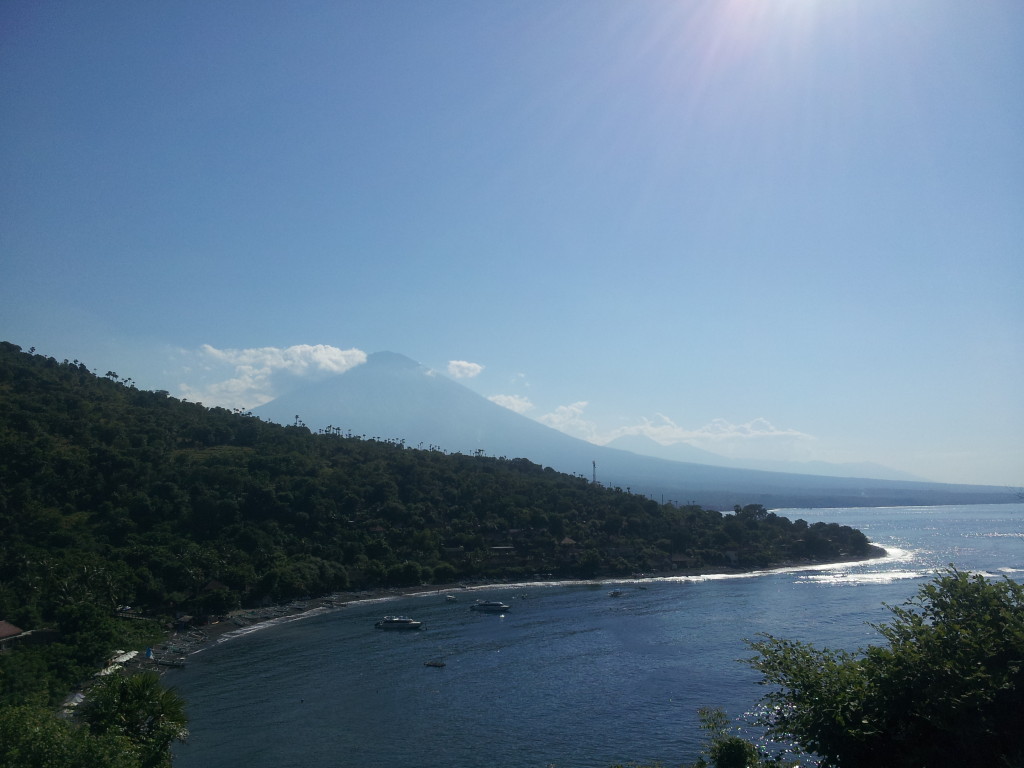 Epic views from the hills 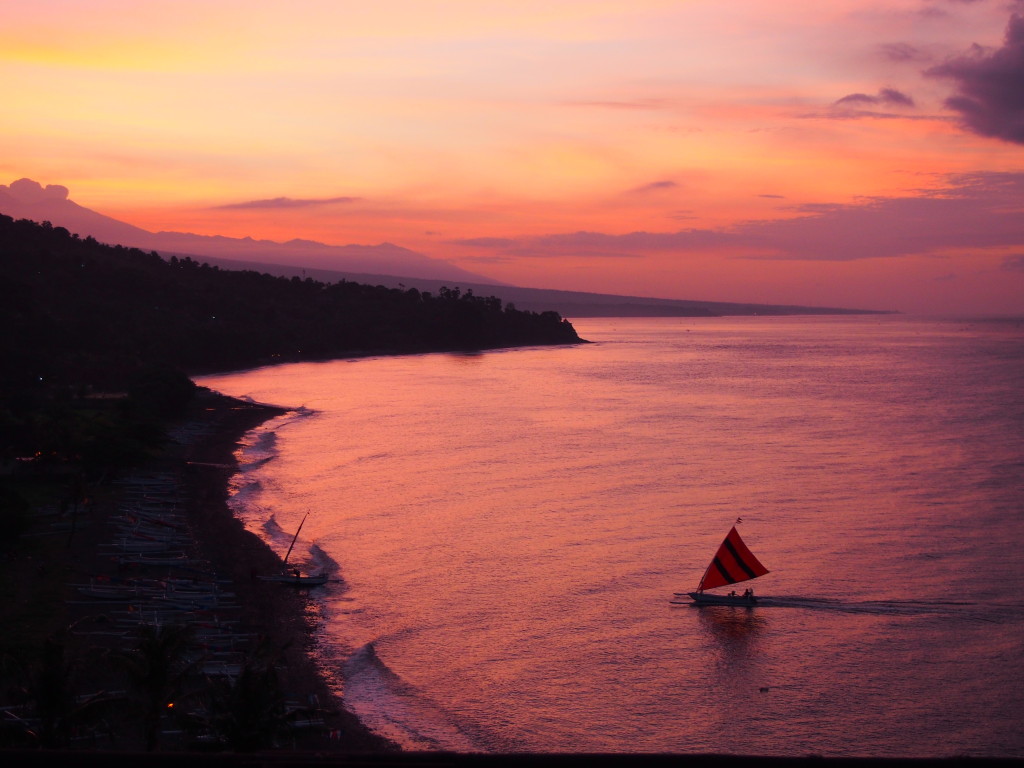 One amazingly awesome thing about our villa is the things that they arrange. They arranged for us to rent mopeds for $4 a day, they arranged for us to rent snorkeling equipment and they even arranged breakfast in our villa. We told them we wanted breakfast at 8am on our second day, pre-ordered and around 7:45 two people came up and cooked us breakfast in our villa. We had fresh fruit salad, eggs and toast. It was so wonderful! After breakfast we went out and picked up our scooters borrowed some snorkeling equipment and set off. Our goal was to find a sunken ship that we could snorkel to. There were two options, one was a Japanese submarine, the other was the USS Liberty, an army cargo ship, both of which were sunk off the coast of Bali during WWII. Although, they are both supposed to be so close to the shore that I imagine everyone was hanging out on the beach rather than fighting (can’t blame ’em tho, the beaches here are incredible!). Anyway we headed out to the USS Liberty, which ended up being about a 30 minute drive (it should have been about a 20 minute drive, but we made a wrong turn or two or three- the streets here are not marked very well). When we arrived at the most popular diving destination in Bali we were almost immediately swarmed by people trying to sell us something. One tee-shirt salesman was particularly tenacious and not only followed us along the beach, he waited while we snorkeled and then continued the hard sell. The water was very choppy and very murky so we ended up not being able to see the ship- a huge disappointment, especially to Nick whose only goal in life, currently, is to see a submerged ship while snorkeling. However, we still had a great day spent scooting all over the island, checking out beaches, snorkeling and generally having a wonderful time. We stopped for lunch at a seafood restaurant where Nick ordered an entire BBQ’d squid- not only did it look awesome, it tasted incredible. Our dinner was at another BBQ restaurant right by the ocean where we got more amazing grilled fish. We hit the hay pretty early that night as we had an early morning of fishing planned! 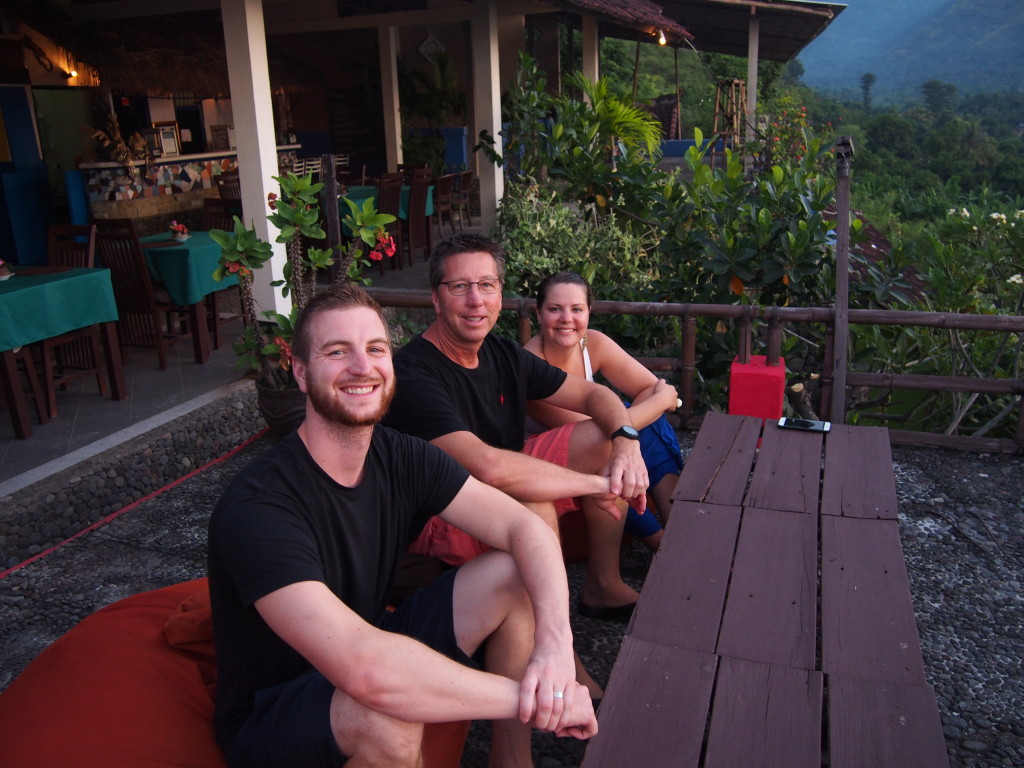