The Most Lucrative Job in Bali

After our massages the night before, we were all pretty exhausted and went to bed fairly early. But we were up bright and early for our breakfast at 8am and to plan our day (I had a banana pancake that was just delightful- banana-ey, dense and flavorful. Yum!). 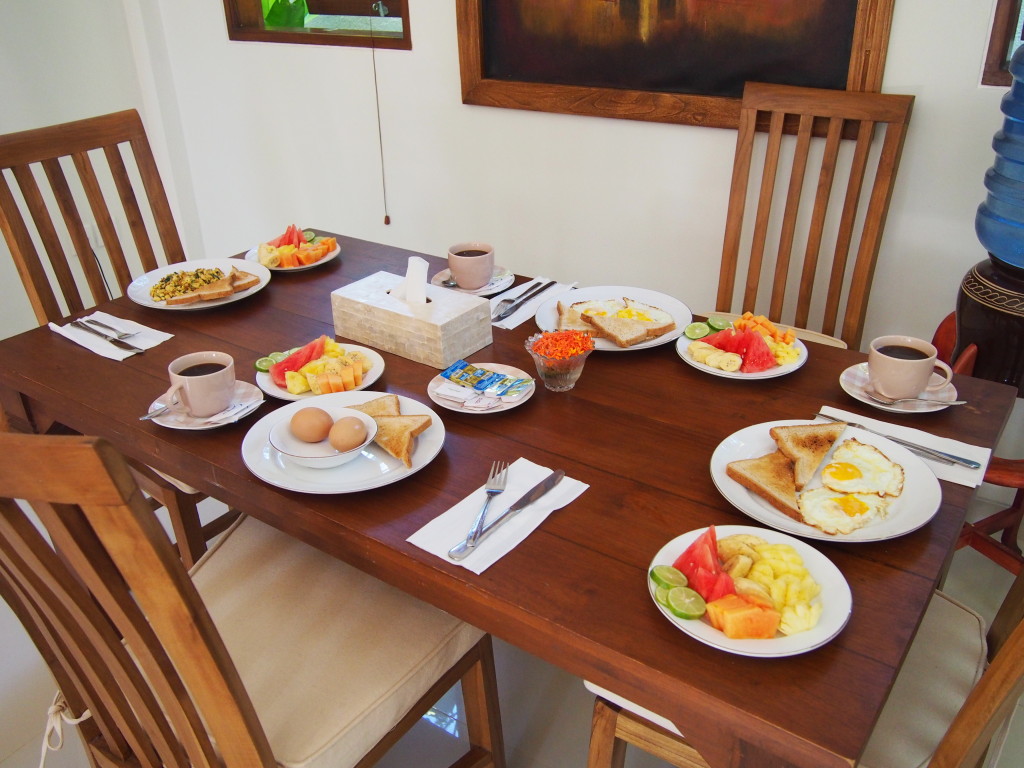 A few days early we had taken a wrong turn on our mopeds. Although the area we had found ourselves in was beautiful, it was not what we were looking for (which was lunch). We had turned around but tried to remember the spot so we could return to it. Over breakfast that morning we decided today was the day, we were off to explore further in the island. Nick and I also suggested going back to the area with the great snorkeling so that Ken and Kelli could see all the fish. We decided to head up into the mountains first. So, we set off on our mopeds in our flip flops and swimsuits (because you never want to not be ready for the beach). We drove along for quite some time, going steadily uphill past rice paddies and into mountains. It was easily the greenest place I have ever seen. 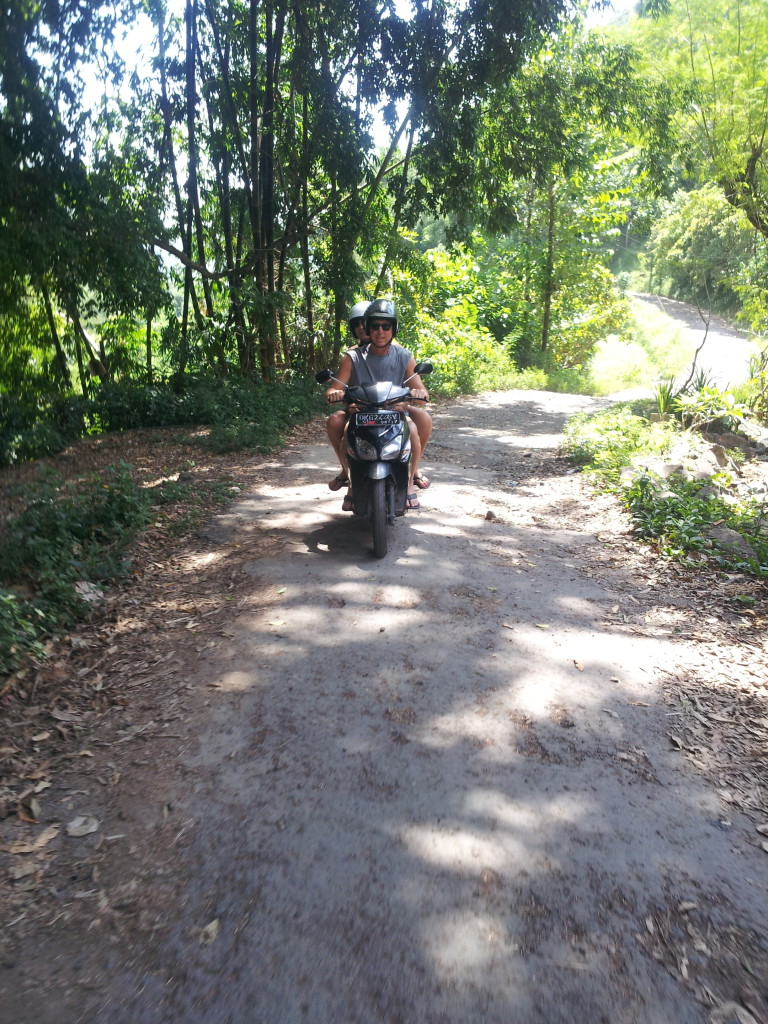 Scooting up into the moutains!

The scenery was absolutely breathtaking. We drove past rural villages and wood working shops, we saw cows and roosters and pigs and tons of kids, many of they riding scooters (our driver the first night told us the legal age was 17, but there is no way most of these kids were even close to 17. Probably not even close to double digits- they were young!!). Mostly, we saw rice paddies. The elaborate tiered fields were so perfect and amazing to look at. 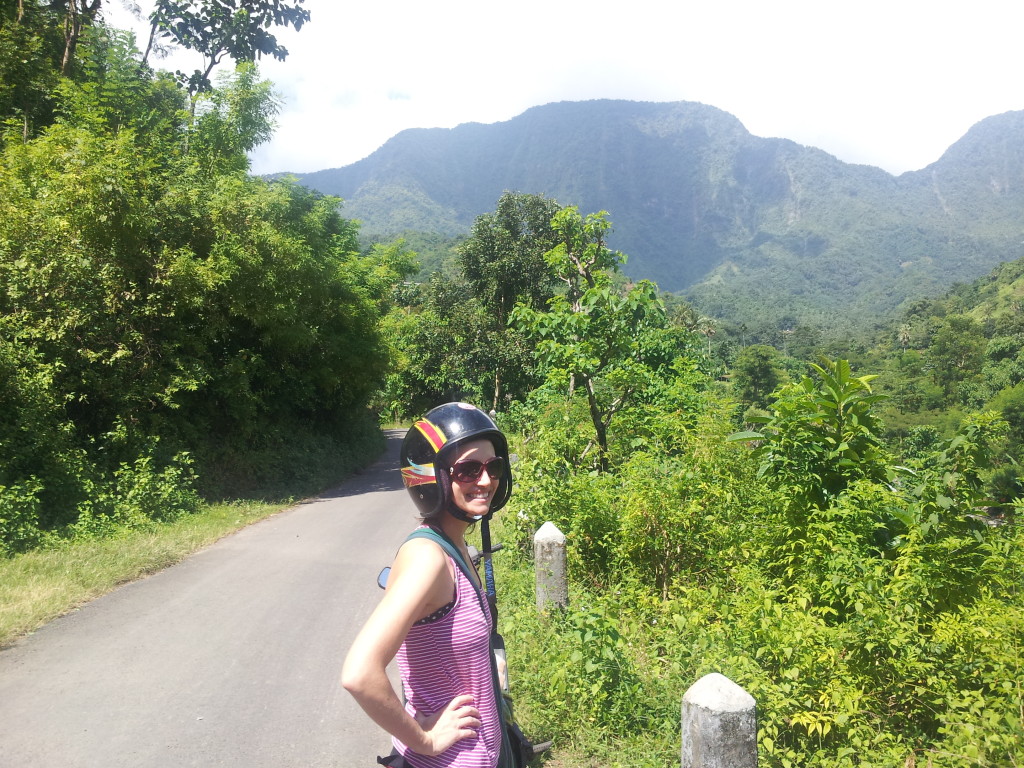 Checking out the rice paddies

We scootered up the road for a while, hoping that we would make it to the small traditional village that we had heard about. As we were scooting, the roads started to get really bad and just kept getting worse and worse the further we went on. We hit pot hole after pot hole (to be fair, a few of the pot holes we hit because Nick was chasing chickens, so it is not entirely the roads fault). Eventually we saw a sign telling us that the 5 holy waters waterfall was just another kilometer from where we were. We soon found ourselves in a small village, two guys came up to us asking where we were going. We said we were just riding around but we would probably head up to the waterfall. They immediately offered to be our guides. No, thanks we said, figuring it was a sales pitch. But they did point us in the right direction. We scooted along a narrow road for a few meters more before we hit a dead end near a small stream. We parked our bikes, found the small, hidden path and set off on, what turned out to be, a very serious hike (in our flips and swimsuits). 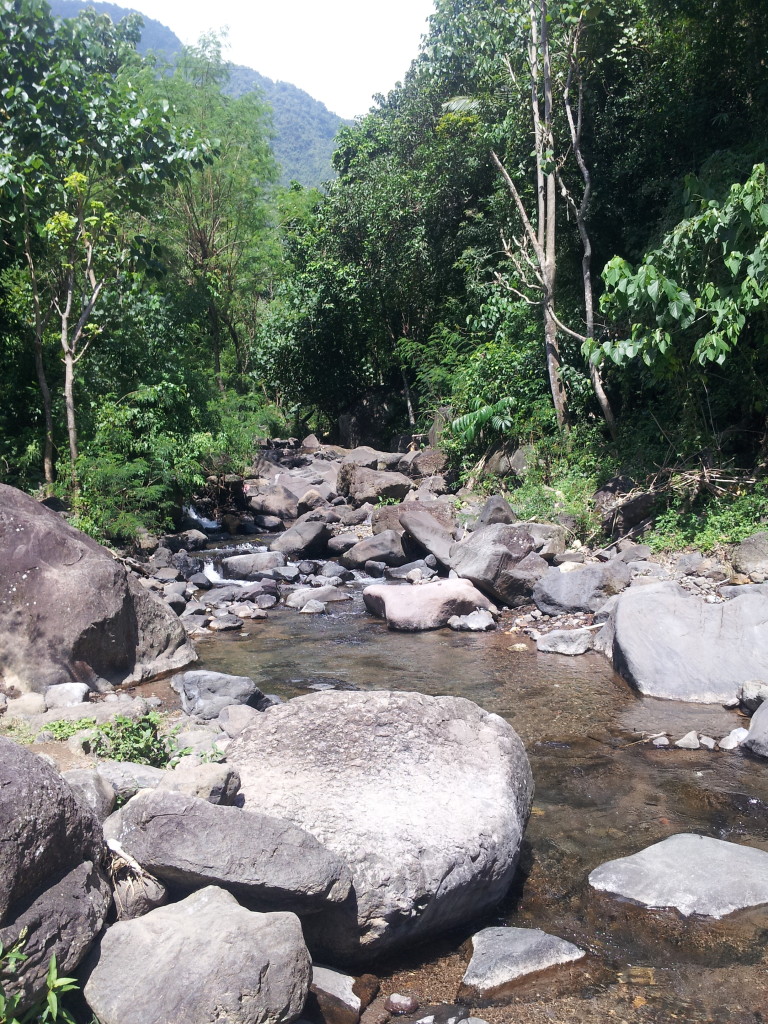 We crossed the stream and came to a rice field where a middle aged man and a small boy showed up. The man spoke very little english but made it clear that he wanted to guide us. We decided to take him up on this offer- mostly because he had the kid with him and it seemed safer than having two younger, bigger guys act as guides. So we followed this man and his very nimble, sure-footed kiddo up and up and up. The whole time wondering aloud what the going rate was to have a guide lead us up the hill. We had asked how much he wanted when he offered to guide us, but he said he didn’t understand the question. We debated about what it should cost and decided that 20,000 rupiah (just under $2) was probably fine. Don’t think we were being cheap, it just seemed like a good amount- We are paying about $4 a day for our scooters and meals here run between 2-4 dollars. So we hiked up a little ways and came to a small waterfall. He indicated that we could continue up the falls if we wanted, that we were only at the first of 5 falls. He seemed to indicate that this was where he would be leaving us and that we could go on ahead if we wanted to. That was fine with us, now that we had found the falls, we figured we could climb up it easily to see the other falls. So we thanked him, Kelli tipped him and we decided to continue our climb. Oddly enough, he seemed to change his mind and scampered up with us, leading us up to the next falls. This climb was much more difficult over much more varied terrain. We were climbing under trees, over boulders and up steps carved into the dirt. We were actually quite glad to have our guide- we would never have found it without him! We worried vaguely about poison ivy, but decided that poison ivy was probably the least of our worries in a tropical jungle. We finally made it to the second falls but when our guide scampered across a steep hill covered in very slippery mud we decided that we had probably had enough and were not at all equipped to head out on that hike in the first place- we were in flip flops and swimming suits and had no water with us (we just knew we were about to end up on an episode of “I Shouldn’t Be Alive”, assuming we made it back alive). So we indicated to our guide that were going to turn around. We headed back down the mountain discussing whether or not to tip the guide again. It was decided that another 20,000 would be fine. So we made it all the way back down, thanked him again and Kelli handed him another 20,000 as we stopped near the rice field where our guide lived. He offered to take us up a different path, but we said no and headed back to out mopeds. As we walked away, we heard his wife (we assume) let out a huge whooping laugh. We figured she was laughing as he told her how wussy we were during our hike- “haha, these crazy Americans only made it about 10 minutes in before they got scared and turned around.” Oh well 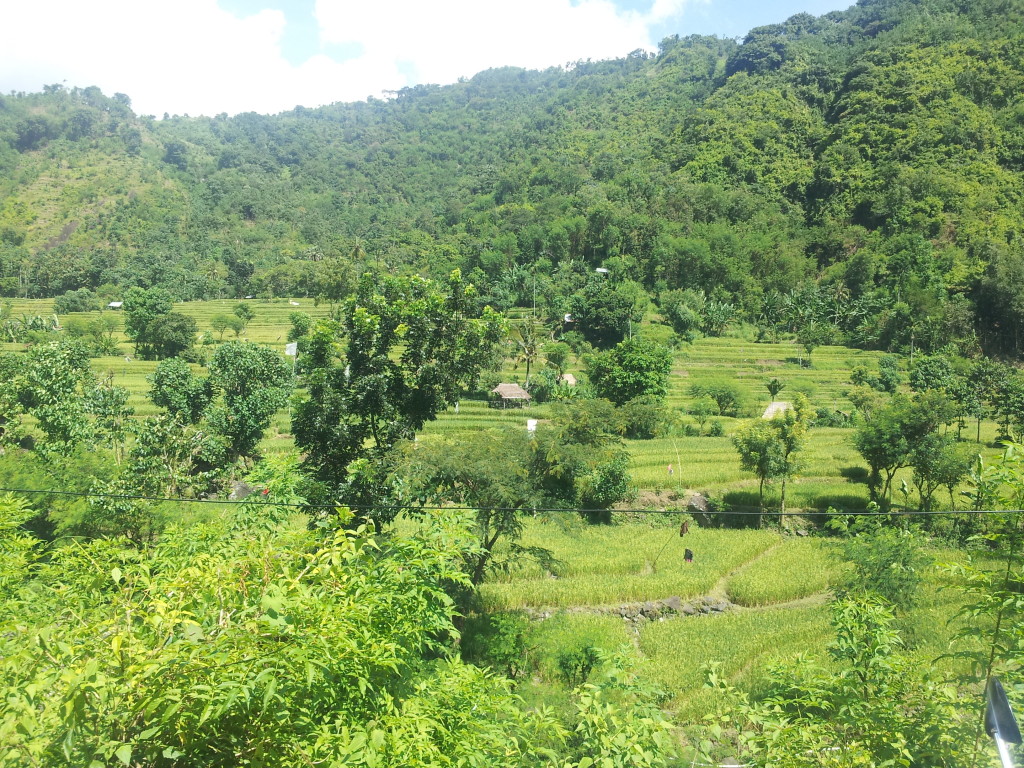 We headed down to the beach for some snorkeling and lunch. We found a great lunch spot right next to our snorkeling beach so had a quick bite to eat. Our bill came… and we couldn’t pay. Ken looked all through his wallet, saying “I am sure I had more money in here. I know I had a few 100,000 bills…” He pulled out all the money he had and Nick says “the pink ones are 100,000? That’s what we gave the guide” We all kinda stopped and stared at each other- and suddenly everything fell into place… Our guide was so eager to keep guiding us because we had tipped 400,000 rupiah (about $36) to have him walk with us about 10 minutes up a hill. That’s probably why his wife laughed so hard and thats why we couldn’t pay for lunch. Whoops! It was a big enough amount that it was ridiculous tip, but small enough that we could laugh at it. And oh man, did we laugh for days! Every time someone would come up to us and try and sell us something we would joke that Kelli’s reputation as a big tipper was proceeding her.

Nick had some money in his shorts and we were able to pay for lunch after all (our lunch- a lunch at a beachside restaurant, for 4 people, plus an appetizer and drinks – cost just over half of what the hike cost!). We then went snorkeling and enjoyed the afternoon on the beach. It was another awesome day!